As our tires left the smooth and measured asphalt and began the uneven, rocky descent of Trails End Road, I realized we were asking a lot of the woods. I always come expecting to take away a sense of comfort, peace, wholeness – all those things. Today, however, we came expecting to lose our sense of hurry.

I wanted countless needles of pine to hide me from the very numbered minutes on the clock. I wanted deep shade and hidden bogs to drown out the march of time, to swallow up the second hand sweeping constantly over our lives, measuring every moment while limiting possibilities. I wanted the forest to shut out time itself, constantly ushering us onward like a tour guide weary of his job now simply going through the motions.

Here it is the end of summer and I’m left with that feeling of regret that follows a season of unexplored possibilities, trails left unexplored in favor of fulfilling responsibilities and obligations. As our feet set upon the padded trail winding deeper 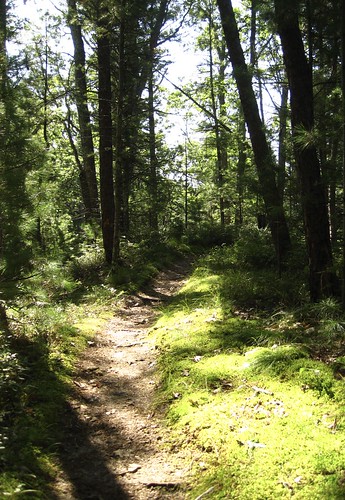 and deeper into endless green, I pondered the road not taken and why making that turn at the metaphorical crossroads is harder than we ever imagine.

By the time we were halfway to the Lasso Loop, my mind had stopped its ceaseless questioning. Instead, I admired the green mosses lining the trail, catching the sunlight, practically glowing, lighting the whole way. I walked with James who has been just as busy and preoccupied as myself. I was delighted to turn and see him pausing to admire a variety of exotic-looking woodland mushrooms.

These woods are the most mystical-feeling acres in the national park, in my opinion. While I don’t claim to believe in wood nymphs, faeries, gnomes, etc., walking through these woods you sense a very old and benevolent yet playful presence that encourages such fancies. The greens here sparkle almost golden in sunlight while birds carry on the day’s conversation high above.

The Lasso Loop enchants with steep climbs and descents, guiding you alongside hidden, ancient bogs where countless worries fall away never to rise again, lost in the flurry of cattails, mired in rich muddy loam. Leaving the trail briefly to visit a bog, I realized I’d forgotten all about schedules, timeliness, and hurry. On this trail there is no speed limit or minimum; you won’t be going any faster than your feet can take you. Your heart and mind may come and go as they please.

Rejoining the trail, I became eager to reach the beach. As we got closer, I was amazed not to hear the roar of the wind ripping across the giant lake. Instead, there was only

an eerie calm. Making the final ascent up the dune, you would never have known a sapphire wonder awaited on the other side.

The path descending to the beach always feels like a homecoming. A 180-degree sweep of crystalline blue ahead, dune grasses ushering you forward, you suddenly lose awareness of your footsteps. Your feet, lost in the sand, seem to move effortlessly toward the blue beyond.

Suddenly, rather than feeling at the mercy of time, I felt in harmony with it. For once, instead of feeling constantly headed someplace but never quite arriving, here I was at the center of everything. No further to go. Nothing more to see.

We sat on the beach to take in the whole expanse. From this spot, you feel you are at the exact midpoint on the giant arc of Platte Bay. Without a driving wind, the waters lapped at the sand with an unusual reverence while the stillness of the lake surface was like staring into a sky beneath and above all at once.

Gazing at the gentle ripples on the surface, I thought of a harp string suspended with immense tension between the two outer points of the bay. To get the fullest sound from a string, the harpist plucks right at the midpoint and this fullest vibration sets all the surrounding strings into sympathetic vibration. If the hands, while searching for the tune or grappling for the right rhythm, wander too high or too low of the midpoint, the pitch will still be correct, but the tone becomes strained, not as full, and not harp-like.

I’m not sure how long we sat there, staring at the water, finding center. I lost count of how many times we each said aloud, “I can’t believe how clear and calm it is!” I’m also not sure how long it took to make the familiar journey back to the trailhead, passing once again all the day’s fresh discoveries. How much, how long, how many… none of it seemed to matter so much.

I asked a lot of the woods, today, and that’s exactly how much I left behind.